6 Steps Towards Reducing Your Burnout Risk in Humanitarian Aid

Is a less stressful work-life possible in humanitarian aid?
Yes, if you follow these 6 steps.

Working in humanitarian aid or development cooperation comes with a very high-stress level, we all know that. And sooner or later that stress will bring us down if we don’t take care of ourselves. At least that is what happened to me in my first years in the business.

I thought to myself, “it’s just part of the job” and that I would have to accept an insane amount of near-constant stress.

But there came a day when I realized that I created most of my stress myself.

How come some colleagues managed to handle the situation we were all in in a calmer, relaxed, less frantic way?

I realized they were under lots of pressure too, but somehow they seemed to be more at peace with themselves.

And I understood it wasn’t just the circumstances that were stressing me out; it was my own demands that drove me crazy.

It was my way of looking at the world around me and at myself, and my attitude that was to blame. That was a very painful but necessary realization.

I took an honest look at myself and decided that I didn’t want to go on like that. I didn’t like the way I suddenly saw myself.

But it also made me realize that I wasn’t at the mercy of somebody else to lessen my stress, and I could take action to change it for the better.

So I started to work on changing my behavior and bit by bit, things got better.

There are fallbacks and it requires daily work, but it’s so worth it. Now I live a much less stressed life than ever before.

And you can do it too, believe me.

So here are my 6 steps to a less stressful life:

1. Stop being a perfectionist

For a long time, I was proud of being a perfectionist. I thought of it as a badge of honor that proved how good I was. Of course, it only showed how afraid I was – afraid of not being accepted should I not be perfect. Much later I realized that nobody likes perfect people. And I learned the bitter lesson, that I drove people close to me crazy with my perfectionism.

Because I could never relax, it made them feel that I expected them to be perfect, too. Very stressful for everyone involved.

And of course, I procrastinated like crazy, because I just wasn’t able to deliver perfect results.

My expectations were just too high for myself. Believe me, it’s not worth it.

I had to accept that I am not perfect and will never be. But I also finally understood that I don’t have to be perfect.

Who cares anyway? Nobody.

Now I say, “good is good enough” and let go. That is such a relief. I get much more stuff done now, and it is also much more fun.

2. Focus on the one thing that is really needed right now

Feeling overwhelmed by too many demands on our time is a major cause of stress at work.

In order to reduce these demands, you have to gain clarity on what is really important for you.

What is important today? That is the only thing that matters.

What goal do you want to achieve today? What is the one task that has the most impact and importance for achieving your goal?

If you have identified that one crucial task, focus on it, block time for it, defend it, and get the work done.

If you try to do several things at the same time, you will just not get good results and will be stressed.

Turn off the push messages on your handphone and the alarm for new emails in your inbox and set fixed times for receiving and answering emails.

We often try to work on so many things at the same time because we lose focus on what it’s really about.

So ask yourself: What is your purpose? Why was your position created? What is your main responsibility? Who do you serve? Focus on that and put aside the rest.

We have to set boundaries and defend our uninterrupted time to get that accomplished. But it’s worth it.

In one hour of uninterrupted time on which you can fully focus on one task, you get much more done than in half a day with constant interruptions.

If you get that one thing done, that’s all you need to do.

“Accept that the system is far from perfect, and make peace with it. That’s part of being a professional too.”

3.  Take time off to free your mind

I know this one is tough when you’re locked in with your colleagues and security doesn’t allow you to get out on your own. But still: get away not only from work but also from your computer on a regular basis.

Have fun and play around: just get a ball and kick it around, you will not do it alone for very long, it’s a great way to get loose and to connect with colleagues, neighborhood kids, or beneficiaries, get a guitar and learn to play, do a bit of yoga or stretching; anything to release the tension in your body.

Meditation is a real game changer! There are great apps that help you to start a meditation routine as well as plenty of helpful YouTube videos.

Anything to get your mind off work and your worries. But getting drunk every evening doesn’t count! That’s cheating.

4.  Don’t take on other people’s problems

It’s tempting, I know. But stay away from your colleagues’ problems. They are old enough to handle them on their own.

I think many of us were born to be problem solvers, where, when we see or hear someone having a problem, we go “Okay, I’ll get involved and sort things out.”

But actually, people aren’t asking you to sort it out. They are just kind of telling you stuff.

Just proactive active listening is often enough. You don’t have to get involved and actively do stuff, especially when you were not asked for help.

And if you were asked for help, learn to say no.

You don’t want to be the doormat of everyone’s problems. Because more often than not, when you’ve got problems, the world turns a blind eye.

“Don’t forget: In the end it`s just a job and not your life.”

5. Learn to take no immediate action

Very often we just react to things that seem to require immediate action from us.

But wait and ask yourself, “what if I don’t react to this issue at hand immediately?”.

Is it really my responsibility to act right now? What if I wait until tomorrow and sleep over it first?

What if I do nothing?

Will my organization go bankrupt, will the office burn down, will people die?

No, in most cases nothing terrible will happen.

Most problems that seem to be so big, so urgent and so crucial are never really that big in the end. We make them so immense. It’s our head reacting to triggers, but very often it’s not the reality.

So stop acting too quickly. Learn that there is a huge difference between reacting and responding to a situation. Stay calm and wait until the dust settles. Lots of problems sort themselves out and fade away over time. Others are handled by someone else.

Often you would have created more havoc by a quick response that was not thought through.

Learn to relax and to act rather than react.

6. Learn to accept the imperfections of the aid business

“This all doesn’t make any sense!” How often did I think that in my career in humanitarian aid and development cooperation?

In nearly all of my jobs, there were moments when I thought that and became miserable.

And I haven’t met a single colleague yet who also didn’t arrive at the moment where they thought they might have to stop working in this field.

The project design is wrong, or the donor guidelines don’t make sense, or my desk officer doesn’t have a clue about my situation on the ground, or the beneficiaries don’t see what a great job we are doing for them, you know the angry bitching most of us get into way too often. But does it change anything?

Sure, this is a faulty system. Very often it sucks. But you will not be able to change that.

So accept that the system is far from perfect, and make peace with it. That’s part of being a professional too.

The world would still be in a much worse situation without our humanitarian aid system, faulty as it might be.

What it comes down to, is that you need to do the best job you can do under the given circumstances.

If you can go home after work and say to yourself “Okay, I wanted to achieve more, but today I did as much as I could and made as much impact as I could. That’s good enough and tomorrow is another day.”

I know, to acknowledge and accepting our limitations is hard for our Ego.

But don’t forget: In the end, it`s just a job and not your life. 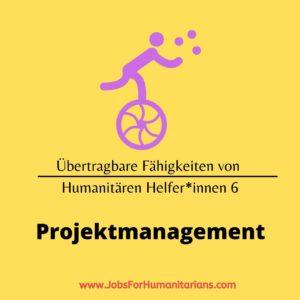